There aren’t many things that can stand the test of time, and counted among that favored few would have to be Ertel’s Famous Butt Cream. For that reason, it is appropriate that the new Maple Lake summer festival, “Days of Old,” has attached the century-old legendary product to its celebration of the good old days.

It was in the early years of the last century that Charles Ertel developed the locally famous cream that has soothed many a case of diaper rash. Charles, who established the local pharmacy which served the Maple Lake community from a store on the corner of Birch and 1st Street for 105 years, was a man of many talents. He and his wife, Mary, were involved in farming, ran a lumber mill and started a business manufacturing pharmaceuticals. Charles was also active in local politics, serving as the mayor of Maple Lake from 1901 to 1904.

When Charles died suddenly in 1906, Mary and her children continued the business. It was son, Harold, who eventually assumed ownership and also inherited his father’s sense of civic duty, serving as Maple Lake’s mayor for a total of 11 years. Harold and his wife, Charlene, had no children and when Harold retired in 1971, nephew Tom Ertel and his wife, Carol, became the third generation of Ertel’s to operate the drug store. And like his grandfather and uncle before him, Tom took his turn as mayor. 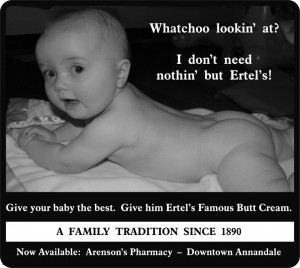 with Tom continuing in semi-retirement as a pharmacist at Arenson’s Drug in Annandale, where Ertel’s Famous Butt Cream is still sold.  Tom said his grandfather’s magic concoction was the signature of a good pharmacist. “Back in those days, every pharmacist had a whole list of things that they made, and this is one that survived,” he said, noting the cough syrups, pain killers, ointments and other sought-after remedies. “People would go to some guy because they liked what he made.” Tom makes the butt cream by hand and said it is a time-consuming process. “It takes a lot of mixing to get it smooth and to make sure the ingredients are mixed well,” he said. As far as the quantity produced, that depends on his mood. “It just depends on how I feel,” he laughed. “I get bored quick doing it.” But since the Ertel’s winter in Florida, considerable time in the summer is spent measuring and mixing. “I work on it in the summer to get a winter supply for Arenson’s,” he said. “It takes me a while to catch up from that.”

The formulas of such products are a source of pride and closely guarded family secrets. Tom recalled reading a story in People Magazine last year about another pharmacist who markets Beaudreaux Butt Paste in Lafayette, Louisiana. While on a trip in that area, Tom stopped in to compare notes and found that the formulas for the two creams are completely different. But folks in this area will swear by the effectiveness of Ertel’s Famous Butt Cream. Tom’s daughter, Mary, said a woman from Brooklyn Center uses the cream at her church daycare and was thrilled to find the local source of the product. “She was so excited,” Mary said. “She said she was going to put flyers around so people would know where to get it.”

Mary said other Minnesota pharmacies have claimed to have discovered the Ertel’s Famous Butt Cream formula, but discerning customers know the real thing when they see it, or at least, their babies do. Tom used to keep fan letters written by happy customers and remembered some of the things they wrote. “One lady called it ‘Booboo Cream,’” he laughed. “She said she put it on every bump and scrape her kids came home with.”
Ertel’s Famous Butt Cream. Then, as now, it’s good for what ails ya.